You are here: Home / Comparisons / Tenpoint Viper S400 vs Ravin R10: Battle Of The Galacticos!

Both of them are priced quite similarly and packs a similar set of specifications. They have their differences and similarities. Which one should you take then? I hope reading the battle of these two will clear up your confusion. Or create more? Haha! Let’s find out.

One thing you can consider better on it is the Micro-Trac barrel. Micro-Trac barrel increases the longevity of the bowstring. It minimizes the contact between the string and the rail. Thus making the crossbow more silent and efficient. 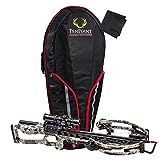 Reason To Choose The Ravin R10?

Ravin R10 has a lot of features that can be considered better than the Viper S400. The main thing, it’s more compact and lighter. That’s what we look for in a crossbow for hunting. A lightweight yet powerful crossbow.

Both of the crossbows can fire arrows at up to 400 FPS of speed. But Ravin R10 can generate a little more power than the Viper S400. If power is your main priority, which makes the Ravin R10 the better crossbow among the two.

No crossbow is 100% flawless. Even the most expensive crossbow has some cons. The main con of the Viper S400 for me was the speed rating. Why? Is TenPoint false advertising? Yes and no.

TenPoint uses different grain arrows to measure the top speed. If you want to hit 400 FPS every shot, you need to use the arrows provided by TenPoint themselves. That makes you highly dependent on TenPoint. Which everyone might not like.

Ravin R10 is one of the best sub $2000 crossbows on the market. The only cons of this crossbow at first was the price. When it came out first, the price tag was quite high for this crossbow. That calmed down as time went by. Besides the price tag, the main con of the crossbow is the cranking aid.

The cranking aid sometimes creates issues while decocking. Thanks to the safety decocking mechanism installed in this crossbow, you won’t accidentally fire the crossbow on the fly. But the cranking aid does acts clumsy sometimes. Making it annoying.

Battle Of The Galacticos. That’s what I would title the fight between TenPoint Viper S400 vs Ravin R10. Even though none of them are the most expensive crossbows on the market. Both can be considered high-end crossbows.

For me, the clear winner here was Ravin R10. The scope on the Ravin R10 is slightly worse and packs fewer features compared to Viper S400. Besides that, on almost all the aspects Ravin R10 has beaten the TenPoint Viper S400. Even in the price-game, Ravin will come ahead.

Yet, whichever you choose, you won’t be wrong. The differences are not night and day. It’s manageable. But if you want the best crossbow on paper and tune it to perform on the field as well, go for the Ravin R10.