Tenpoint crossbows are one of the best crossbow manufacturers in the world. They have made so many good crossbows over the years, it’s hard to decide which one is the best. Tenpoitn Turbo M1 vs Titan M1 is an argument that is going on for years.

Is there any difference between the two? Besides the obvious naming scheme, what else do they have to offer? They are not even the most expensive crossbows from Tenpoint! Why compete against each other then? So many questions. Let’s start answering them.

The main difference between the two was the speed. The Turbo M1 is capable of speeding up to 380 FPS. While the Titan M1 can reach up to 370 FPS. 10 FPS difference. Not that huge margin. But it’s there.

The next big difference is the design. While the Turbo M1 uses MOBUC skin, the Titan M1 uses Truetimber Strata. Both of them look excellent. There is no doubt regarding that.

Why Purchase The Tenpoint Turbo M1?

The Turbo M1 is 10 FPS faster than the Titan M1. Does that make a huge difference? In theory, it doesn’t. But when you add in the extra 7 lbs of kinetic energy in the deal. The 10 FPS difference will make much more sense.

Besides that, the look can be considered as another advantage of this crossbow. Even though if it was up to me, then I wouldn’t let the design dictate my preference.

The next best thing about this crossbow is the cocking aid. Instead of using ACUdraw or 50 SLED, Turbo M1 uses ACUdraw pro and 50-sled. You need to choose from one of them. I highly recommend you to go for the ACUdraw pro version. It will reduce the draw weight by a lot. 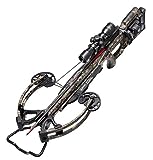 Why Not The Titan M1 Instead?

Titan M1 is the cheaper version of Turbo M1. Surprisingly the differences weren’t as high as we were expecting. They share too many similarities. You guys are probably aware of Apple and Samsung’s flagship devices. They release the same model at 3 different price points. Even though the core of each phone is the same, they share some differences.

That’s exactly what Titan M1 is. It’s the younger brother of Turbo M1. On paper, it’s an identical crossbow that is just a tad bit slower than the Turbo M1. It’s also the cheaper version of Turbo M1. If you liked the Turbo M1 and it’s too expensive for you, go for the Titan M1. You won’t be disappointed at all. 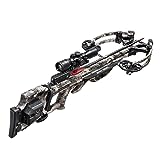 What Are The Disadvantages Of The Turbo M1?

As much as I loved how well the Turbo M1 is. It’s not free from flaws. The main problems with both of the mentioned crossbows are the noise.

There is a small string ping that wasn’t fixed from the factory. Lubing the rail regularly and installing sound dampeners will eliminate this issue. But still, for a crossbow of this caliber, it shouldn’t have happened.

Disadvantages Of The Titan M1

Another issue that both of them suffer from is speed. Why is that? You will need specific sets of arrows to achieve maximum speed. That’s a bit of a problem for me.

At the end of the day, there is no clear winner between Tenpoint Turbo M1 vs Titan M1. I know the ACUdraw pro option should be the obvious choice here. Yet, I think I will leave that decision to you. Is the ACUdraw pro absolutely necessary? You need to answer that question first. If so, then you have it. Turbo M1 is the one to get for.

Do you want to save some money and spend that on the accessories? Then Titan M1 will be more than enough. No matter which one you go for, there is no wrong choice here.