Barnett is known for making some of the best mid-range crossbows on the market. Their crossbows are often praised highly by veterans and newbies alike. Often we get confused about which Barnett crossbow should we go for. Barnett Whitetail Pro STR and Barnett Raptor Pro STR are two very similar crossbows. Their targeted audience and MSRP is also quite similar. What makes them different from one another? Let’s find that out.

Will you believe me if I said there are no differences between the two? That’s right! I am as surprised as you are. If you did your research, then you already know both of these crossbows are the same crossbow but sold under different names in different stores. Why is that? Honestly, I don’t think even Barnett could answer that.

The conclusion I came up with is, both of these crossbows are announced under two names for different regions. Otherwise, it doesn’t make any sense whatsoever.

Why Choose Any Of These Crossbows?

They are some of the best crossbows under $800. Making them incredibly valuable to newcomers. As a newbie, you don’t want a heavy crossbow that has over 250 lbs of draw weight. You want something lightweight with low draw weight and high speed.

All of those are present in both of these crossbows. Raptor Pro STR is a lightweight crossbow. Weighing at 6.9lbs without any accessories, it’s not that heavy. With accessories the total weight will still be lower than 8lbs. Making it an ideal buy for newbies.

The crossbow is capable of firing up to 400 FPS. That’s a lot of speed for someone who never held a crossbow before. You can easily hit any target from a long-range. Also, the fact that they come with a good scope and some arrows to get you started is just excellent. 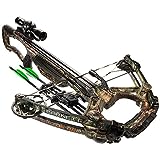 Cons Of These Crossbows

For that purpose, this crossbow can lack a bit of creativity. The silencing mechanism on this is also subpar. It’s not the best by any means. I will recommend getting third party string dampeners for the crossbow. Other than that, I don’t have much to complain about any of these crossbows.

I know this was supposed to be a comparison. Barnett Whitetail Pro STR vs Barnett Raptor Pro STR. But how can you expect me to compare when both of them are the same exact thing? Right?

That’s why I took a different approach from which you can still learn plenty. That should clear up the confusion between the two and help you decide your next crossbow. If you need further help, don’t worry. I am not going anywhere. You can ask them till your hearts content.