We will find that out soon enough. But what we won’t find out is, why? Why does Barnett name their crossbows so similar? What’s the point? If you know it, do let me know it down below. Now that we have that out of the way, let’s get started.

Even though the Hunter II is the lighter and smaller crossbow among the two, it’s not the powerful one. The Whitetail Pro STR is far more powerful. The top speed on the Pro STR is also quite high. Even with recommended arrows, Hunter II won’t be able to close the gap between the two. The included scope on the Pro STR is quite good. Far better than what you expect in this price range.

The Pro STR has a lower drawer weight. For a crossbow that can reach 400 FPS, the draw weight is not that high. It’s only 187 lbs. And you can lower that even further by using the rope coking device. That will eliminate 50% of the draw weight.

If you want a smaller and compact crossbow, but don’t mind sacrificing everything else, then you can go for the Hunter II. Otherwise, the Pro STR drives the better bargain here. 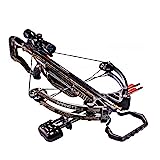 The included scope on the Hunter II is not the best. It’s quite decent but there are other better crossbows available for purchase. We can’t forget that this costs nearly half of the price of the Whitetail Pro STR. I think it gets a passing grade.

With the cranking device, the Whitetail Pro STR costs nearly double of the price of the Whitetail Hunter II. While buying the crossbow, you need to figure out whether you are okay with spending more or not.