Both Barnett Recruit and Jackal were some of the most popular crossbows on the market. Time changes, but these crossbows didn’t. They aged like a fine wine. I am sure you weren’t expecting a decade old crossbow to make a comeback in the 2021. Jackal was the unofficial national crossbow for some times. It’s still one of the most sold Barnett crossbows of all time. Recruit will have a hard time topping that. Or will it? Let’s find out.

Those are the noteworthy differences between the barnett recruit & jackal. Now let’s find out which one to choose and why.

The Barnett Recruit is a fun to use crossbow that doesn’t cost a fortune. Honestly, it’s not the most powerful crossbows by any means. It’s a crossbow that’s get the job done and that’s it. You can’t expect any miracles from it. It can fire at up to 330 FPS. On today’s standard, that’s not much. But for a newbie or a teenager, that’s still a lot. You can easily practice or hunt with that much power and speed. Besides the price tag, the Recruit has nothing else going for it. 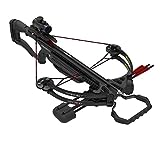 Both on paper and on field the Jackal is the better crossbow here. It outperforms the Recruit by a lot. Even though the speed difference is only 15 FPS, the kinetic energy difference makes the gap look like huge.

Let’s not forget the fact that the Jackal has been on the list of most sold crossbows for over a decade. That says something about the quality of this crossbow.

Cons Of Having Barnett Recruit

Recruit isn’t a bad crossbow. But one thing that I think is terrible on the crossbow is the scope. Why does it have a red dot sight? What’s the point of having a crossbow that can easily shoot over 40 yards, if you are limited with a red dot sight? How are you supposed to accurately shoot the target? I am not Jason Bourne, you know.

Also, there were complaints regarding the strings of the bow. Some complained it’s too fragile. But that can be due to QC. As not many people complained about that.

Cons Of Having Barnett Jackal

Barnett Jackal comes without any kind of cocking aid. I know 150lbs of draw weight is quite low for a compound crossbow. Yet, I would love to have a rope cocking device with the bow. Rope cocking device is not crazy expensive or anything. It’s more about the gesture. Anyway, let’s not get personal here. The crossbow is also quite loud. That was expected, it doesn’t come with any kind of noise suppression at all.

Both of these crossbows are fairly old now. It doesn’t make sense recommending them over the newer and more powerful crossbows. Yet, here we are. Talking about Barnett Recruit vs Jackal. Two of the oldest lions in the den.

To be honest, they are still fairly good performing. The build quality is decent and the performance is more than acceptable. That’s why if you really want, you can go for one of them. If not, go for something else.